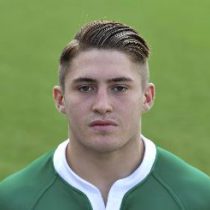 Rory, who has appeared for Fylde, made his England U18 debut off the bench in the 21-5 win over France at Doncaster in February 2015, having played for Lancashire U15, U16, the North U16 and England U17.

He started playing rugby at six years old at Melrose RFC and became a member of Sale Sharks Junior Academy (2013/15). This was after he had rugby league experience with Wigan St Cuthberts and was briefly on the Salford City Reds Scholarship scheme. He also spent a season with Wigan RUFC and helped his age group to win the Lancashire Plate in 2012/13.

Schooled at Galashiels Academy, he grew up as a season ticket holder for the now defunct Border Reivers when they played home matches at Gala. He joined the London Irish Academy.

Rory switched to scrum half from wing/centre and was called up to the England squad for Round 3 of the 2017 U20 6 Nations and featured for England at the 2017 World Rugby U20 Championship.

Since then Brand has featured for London Irish in the Anglo-Welsh and Challenge Cup.