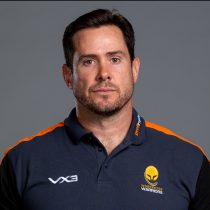 Born in Durban and raised in the Eastern Cape, Duncan started his career at the Sharks, representing them in the Vodacom Cup in 1999 and 2001.

In his playing days Duncan represented the Sharks, before going on to play for the Cheetahs. He was part of the Cheetahs’ Currie Cup winning side in 2006, before captaining the team to another Currie Cup victory in 2007.

He then moved to Yamaha Jubilo in Japan before going on to captain the Eastern Province Kings, where he played underneath Warriors Alan Solomons

Having announced his retirement at the end of 2011, the former lock originally made the move into coaching in 2012 and joined the Free State Cheetahs in 2014 to coach their Vodacom Cup and Currie Cup teams.

He went on to become the Union's Director of Rugby.

In July 2017, the Cheetahs announced a role change to their coaching setup, naming Duncan as Head Coach of the team, with Franco Smith taking over as Director of Rugby.

In February 2018, Worcester Warriors announced that Duncan will join the club as Head Coach for the 2018-19 season.