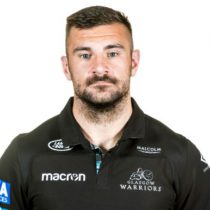 Hughes made his Scotland 7s debut in the 2011/12 season at the Marriott London 7s in May 2012, in the pool game against South Africa.

Hughes made his Warriors debut against Connacht at Scotstoun in February 2014 and went on to play for Scotland in a Rugby World Cup warm-up, against Italy.

On 11 December 2015, Hughes was loaned out to London Scottish to get game time before the Six Nations tournament. He scored five tries in four appearances for Scottish before returning to Glasgow Warriors in time for the Ospreys game on 31 January 2016.

Hughes earned his second cap off the bench against Georgia in the Autumn International.

The wing signed a new contract with Glasgow, penning a two-year deal keeping him at Scotstoun until at least May 2019.

In May 2017, two times capped Hughes was called up to the Scotland squad for the two-Test summer tour.

He was contracted until 2020 for Glasgow following 48 appearances and 6 tries.

In January 2020, The Scotland capped winger joined Leicester Tigers on loan with immediate effect and Glasgow Warriors have the right to recall him.