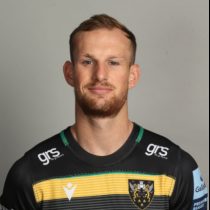 A former pupil at Felsted School, Hutchinson joined Northampton Saints from Shelford RFC, having represented Cambridshire. Born in Cambridge he has shown plenty of flexibility across the backline but favors the 10 jumper.

After impressing for Scotland at under-18 level last year, for whom he won four caps, Rory was included in the under-20squad to travel to New Zealand for the 2014 IRB Junior World Championship making his U20 debut against South Africa. He featured in both the 2014 and 2015 Six Nations and World Rugby U20 Championships. He played in all 5 of Scotland's U20 World Championship games in 2015

Hutchinson broke into the Saints’ first-team squad in the 2016/17 season making his debut against Exeter Chiefs where his try was voted the clubs try of the season. He won back to back Premiership Rugby A League Titles with Saints.

In May 2019 he was selected for Scotland's 42-man RWC training squad. Hutchinson missed out on selection for the Rugby World Cup despite an impressive start to his test career where he scored two tries in first three games, after debuting off the bench against France.

November 2019 saw him sign a new deal to remain at Northampton Saints following 46 appearances and six tries for the club.

He was named in Scotland's squad for the 2020 Six Nations following his suprise omission from the Rugby World Cup.