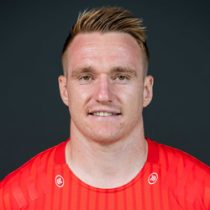 The Douglas native was first introduced to rugby at PBC, Cork where he reached the schools final. Scannell went on to represent Ireland at Ireland U18 Schools in 2011 when they won the FIRA-AER European Championship and Ireland U20’s, where he started every game of the 2013 U20 6 Nations and also featured in every match of the U20 Junior World Championship in France later that year.

Rory was promoted from the sub academy to the academy programme at the start of the 2013/14 season and his younger brother of former Ireland U20s Captain Niall Scannell who moved from the academy to a development contract.

Rory started in all of the 2013 Irish U20s 6 Nation games, playing across the backline. Scannell played an instrumental role in the U20s Junior World Championship in France in June 2013, featuring in every game, starting at fullback in the opening game against Australia. He also added two conversions and eight penalties during the campaign. He went on to make his Munster senior debut against London Irish in the pre-season game in Musgrave Park in August 2013, and his Munster A B&I Cup debut against Stirling County in October '13 at Bandon RFC.

He also played for the Munster 7’s side at the inaugural Limerick World Club 7s Festival in Thomond Park, August 2014 with his senior Munster debut coming in November 2014, starting at Inside Centre against Cardiff Blues in the Guinness Pro 12.

In January 2015 he was named the Ulster Bank League Rising Star of the Month after successful outings with his club side Dolphin RFC and was nominated for the 2015 John McCarthy Award for Academy Player of the Year in 2015.


He began the 2015/16 season with two consecutive PRO12 starts against Treviso and Ospreys and the final year academy player went on to make the number 12 jersey is own from December having also Champions Cup debut for Munster, coming off the bench in their opening 2015/16 pool game against Treviso.

Joined by his brother Niall in the starting line-up, the Scannells become the first set of brothers to start for Munster in the PRO12 in December’s clash away to Newport Gwent Dragons at Rodney Parade.

In May 2016, he became the first player to win both Academy and Young Player of the Year. Rory was promoted from the academy ranks to a development contract at the start of the 2016/17 season and advanced to a full contract for season 2017/18. Rory and brother Niall Scannell were called into the Irish 2017 6 Nations squad.

In May 2017, Rory was named in the Ireland squad for the summer tour to USA & Japan, making his debut against the USA in New Jersey where he kicked four points. In that same Test, he and his older brother Niall became the first Munster brothers to wear Irish jerseys together on the international stage in the professional era. Made his first international start a week later against Japan, playing all three Tests. His impressive performance at the tour secured his spot in Ireland's squad for the 2018 Six Nations.

Rory became the youngest player to reach 100 Munster appearances at the age of just 25 when starting the March 2019 clash away to Scarlets. He is currently contracted to Munster until 2021 and by June 2020 he has represented the club 124 times scoring 149 points with his handy long-range boot also proving to be an asset to the Province.

He has also made three appearances in the Green jersey.