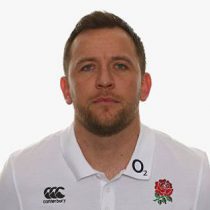 Teague is well versed in English rugby having played at fly-half for Gloucester and Bristol. He also played for Grenoble in France and joined the RFU after a spell working in Saracens' academy.

He began his coaching life at Harrow where he had a role in mentoring and coaching the young Maro Itoje who was crowned World Rugby's breakthrough player for 2016.

After his contribution in England Under-20's World Championship win in the summer of 2016, he was appointed as full-time skills coach for the senior England team in January 2017.

In the summer of 2017, Teague joined Bordeaux in the Top 14 as a backs coach and was then appointed head coach following the departure of Jacques Brunel to the national side.

In November 2018, Teague and Union Bordeaux parted ways after a run of losses.