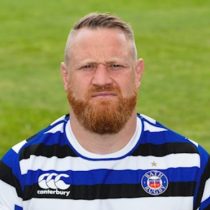 A product of the Newcastle Falcons academy, Batty's rugby career began at Barnard Castle where he grew into his own as a player following a spell in New Zealand. There he developed his game, first at the NZ International Rugby

Academy then on loan at NPC team Wairarapa-Bush, he returned to Falcons as a full-time professional.

A hooker by trade, Batty's dynamism in the loose sets him apart from your average no.2. Having joined Bath Rugby from Rotherham Titans in 2010, he is now one of the key hookers at the Club.

The incredibly mobile forward who poses a threat in the loose and at the set-piece, Batty has made over 150 appearances to date in the Blue, Black and White.

Batty signed an extension to his contract in the 2018/19 season which saw him enter a decade of service with the Club.

On 25 April 2019 Batty renewed his contract with Bath following nine seasons with the side.