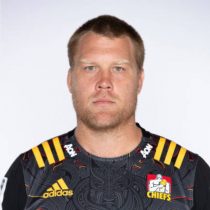 A power house tighthead prop, Geldenhuys got his first taste of senior provincial rugby with Border in 2005.

A brief stint with Pumas in 2007 saw the prop signing for the Lions in 2008, making his Super Rugby debut and spending four seasons with the province. 2012 saw two short term contracts with Boland and the Cheetahs before heading to the EP Kings for 2013.

A stint with the Highlanders soon followed in the 2015 & 2016 seasons for the veteran but was not re-signed by new head coach Tony Brown for 2017.

Geldenhuys headed back to South Africa to join the Southern Kings ahead of the 2017 Super Rugby season.

He enters the 2018 Super Rugby season having already made 53 appearances in the competition.

Geldenhuys made 5 appearances for the Sharks during the 2018 Super Rugby before signing with Bay of Plenty Steamers ahead of the 2018 Mitre 10 Cup season.