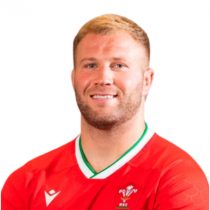 A no-nonsense tough tackling and ball carrying back rower, Ross Moriarty has followed his father's footsteps in representing his country on the side of the scrum. The Moriarty family in Welsh rugby circles with Ross' uncle Paul also representing Wales at a Rugby World Cup and even captained the side in the inaugural Rugby World Cup. Educated at Glyncollen Primary School and Morriston Comprehensive School in Swansea, Moriarty was a student at Hartpury College and was capped at U18 level with England U18 level.

A stellar 2012/13 season with Hartpury RFC saw Moriarty break into the Gloucester senior team as well as earn a call up to the England U20s Six Nations squad and played a big part in England U20s winning the Junior World Championship for the first time, in France, 2013, and then going one better to defend the title in New Zealand in 2014.

In November 2014, Moriarty signed a new contract with Gloucester Rugby, making his first-team debut for the Cherry & Whites two years prior. Despite his success at age-group level with England, Ross opted to represent his country of birth and was selected for the initial 47-man training squad by Wales for the Rugby World Cup 2015.

Moriarty made his test debut for Wales against Ireland during the build-up to the Rugby World Cup and was sent to the sin bin 45 minutes into his debut. Moriarty was included in the Welsh RWC Squad after initially missing out. An injury to Leigh Halfpenny saw Walker come into the squad who also injured himself days before the tournament allowing Moriarty to take his place.

Moriarty's versatility saw him feature off the bench twice for Wales at the World Cup. He completed the season at Gloucester and was voted as the Young Player of the Season by the club's supporters for 2015-16.

He cemented his place in both the Gloucester and Wales squad and was named in Rob Howley's squad for the 2017 Six Nations championship, having made 10 appearances for Wales. The hard-working back-rower was one of the shock calls in Warren Gatland's 41 man squad for the British & Irish Lions tour to New Zealand. At his time of selection, he had made 17 Welsh caps.

In May 2017, Moriarty was again named as Gloucester's Young Player of the Season for the 2016/17. After 5 years with Gloucester, the club confirmed that Moriarty would be leaving Kingsholm at the end of the 2017 season after signing a two-year deal with Dragons Rugby.

Moriarty has continued to be regular in the Wales squad and took his test cap tally to 45 during the 2020 Six Nations. He has also been on a Lions Tour and two Rugby World Cups.

In April 2020, the British & Irish Lions and Wales looseforward ended speculations around his future by rejecting advances from Premiership, TOP14 and other PRO14 clubs and signed a new long-term contract to extend his stay at Dragons.

He has played 17 times for Dragons since joining the club.