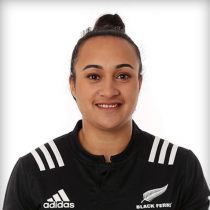 Ruahei Demant is one of the new breed of young players in women’s rugby – skilled, fast and going places.

She has had to deal with more long-term injuries than most young players, having endured no less than three knee reconstructions since her 2013 debut for the Auckland Storm.

Demant brings versatility to any team, though No 10 is the jersey she wore on six occasions for the Storm in the 2017 Farah Palmer Cup.

Demant’s time management skills are also finely honed as, along with her training for both her College Rifles club and as a contracted Black Fern, she works fulltime at an immigration consultancy firm and does part-time law and commerce studies at the University of Auckland.

She is not the only Black Fern in her family - her sister is 2015 Black Fern Kiritapu Demant.

The versatile back heads into the 2019 season with five test caps.