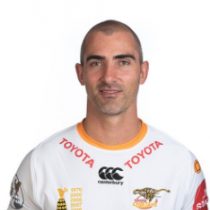 Pienaar made his professional debut in 2004 for the Natal Sharks. He played for the Currie Cup side for six years earning 32 caps and scoring 261 points. In 2005 he made his debut for The Sharks in the Super Rugby Tournament where he played in combination with the Natal Sharks until 2010. Pienaar joined Ulster in 2010 and has had tremendous success with Province.

He was integral in the 2012 campaign that saw Ulster reach the Final of the Heineken Cup. Pienaar signed a 3 year extension to his Ulster contract keeping him in Belfast until the end of the 2016/17 season.

Pienaar made his debut for the Springboks in the 2006 Tri-Nations against New Zealand and was a member of the successful 2007 World Cup squad.He has also been part of the Under-19 (2003) and Under-21 (2005) winning squads.

Since 2013 he has become a regular in the starting lineup due to his consistent performances. He has been selected for the 2015 Rugby Championship squad and started against both Australia and New Zealand.

Due to the IRFU's succession policy, Ulster were unable to extend Pienaar's contract beyond the 2016/17 season.

Pienaar, who has become a favourite with the Kingspan Stadium faithful during the past seven seasons, he amassed a tally of 141 caps and 877 points in the Ulster jersey.

At the end of the 2018/19 season, Pienaar was granted an early release from his contract.

July 2019 saw him sign a two-year deal with the Cheetahs.