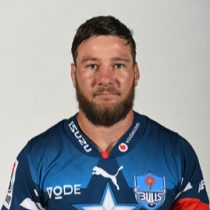 A Lions age-group representative from U16 to U19, Steenkamp was selected for the South African Schools team in 2011.

A move to Pretoria in 2012 saw the loose forward playing for the Bulls U19 and U21 teams, where his outstanding performances were rewarded with a call to the South African U20s for the 2013 IRB Junior World Championship.

Steenkamp started the 2015 season by representing UP Tuks in the Varsity Cup and helped the side to a successful campaign, as they went on to win the competition.

In October 2016 Steenkamp was named in the Bulls 2017 Super Rugby squad for the first time.

He went on to make his debut in Round 2 of the competition against the Sunwolves.

Steenkamp was named as the Blue Bulls captain for the 2017 Currie Cup before being awarded Player's Player of the Year at the Blue Bulls awards ceremony.

At the end of the 2019 Currie Cup season, Steenkamp signed a short term deal with Edinburgh as cover for the World Cup.