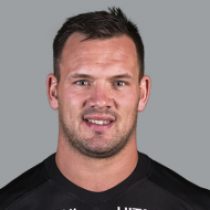 Ryan Burrows joined Carnegie in 2011 and is now one of the most senior and longest serving players in the squad. In his 120 caps for the club he has won Player of the Year, twice, and has been nominated for the RPA Players award.

The back row player is no stranger to cross with try line, registering tries on debut for Carnegie and in the 2014/15 season registered 9 tries in 23 appearances, the 2014/15 season was a particularly successful on e for Burrows as he was once again nominated for player of the season.

Having scored 28 tries in his 138 appearances for Carnegie since joining them in 2011, Burrows signed for Newcastle Falcons in the Premiership in February 2017.

As of the 2018/2019 Champions Cup, Burrows has had 9 European Cups appearances scoring 2 tries.