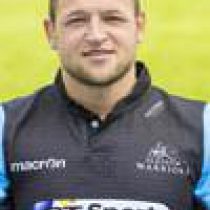 Educated in Malaysia, the Kirkcaldy born prop is one of the few players to have represented Scotland’s three professional clubs, Border Reivers, Edinburgh and Glasgow Warriors. An ex soldier, Grant has represented the Army team and well as the combined services U21 team.

Prior to his 2010 move to Glasgow, Grant only appeared marginally for the Border Reivers and Edinburgh respectively. However, since his transfer to the Warriors, he has had significant first team exposure. A previous Scotland A and U-21 international, Grant made his Scotland debut in their 2012 game against Australia on the back of consistent form for Glasgow.

In 2013, Grant represented the British and Irish Lions on their tour to Australia, joining the squad as a late replacement for the injured Gethin Jenkins.

The loosehead prop, who is known for his scrummaging ability, signed for the Worcester Warriors in January 2017.

In February 2018, Grant signed an extension to his contract to remain at Glasgow until the end of the 2017-18 season after re-joining the club on a short-term deal in September 2017.

He has made 111 appearances for the club.

At the end of the 2017/18 season Grant announced his retirement.