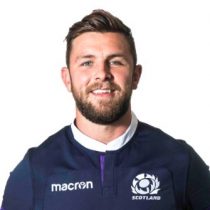 Wilson is a dynamic No.8 who enjoyed a fine debut campaign with Glasgow Warriors in 2010/11, most notably when he delivered a man of the match-winning display in the Heineken Cup win over London Wasps at Firhill in January 2011.

He improved yet further in terms of consistency and effectiveness the following year, playing a major role in helping the Warriors to the PRO12 semi-finals and he has stepped in as captain when required and became one of the leading figures at the club.

Prior to signing for Glasgow, he played for London Irish and Wasps in the English Premiership’s A League as well as for the Four London Academies in an under-19 match against France.

The Glasgow Warriors forward has 45 Scotland caps and started against Australia in the Autumn International but was then named as a replacement for the Argentina clash due to an injury sustained in the Australia fixture.

Wilson was named as Glasgow Warriors captain for the 2017-18 season, the Scotland forward has made 157 appearances for the club, helping Glasgow to their maiden Pro12 title in 2015.

He was named club captain by Dave Rennie after the New Zealander took over from Gregor Townsend ahead of the 2017/18 season and Townsend made him Scotland Vice Captain following his appointment as Scotland Head Coach.

In April 2018, Wilson signed a new two-year with Glasgow Warriors, the new deal would see the backrower complete a decade in Glasgow after joining the club in 2010 and having gone on to amass 157 appearances, 119 of them being starts.

Wilson was not included in the Scotland squad for the 2020 Six Nations, but continued to play a leadership role with the Warriors, signing a new two-year deal with the side in February 2020.

In August 2020, Wilson was named co-captain of Glasgow Warriors alongside Danny Wilson.