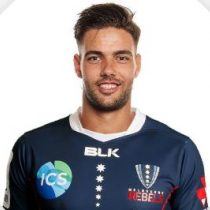 While attending Churchlands High School in Perth, Louwrens was selected for the U/18 State Schoolboy Western Australia in 2008 before returning to his country of birth, South Africa, the following year and played at the Craven Week tournament representing Valke at the Under 19 Currie Cup.

After being banned by SARU for failing a drug test, Louwrens made his way back to Perth where he was given a second chance, rejoining the RugbyWA Academy in 2011 and playing his way to the Force 'A' team.

After rupturing his ACL which ended his 2014 campaign, Louwrens made the most of his opportunities and eventually made his Super Rugby debut off the bench against the Chiefs in Hamilton.

The South African-born scrumhalf tallied 19 caps after that Round 11 debut and wasted no time getting his name on the board, scoring tries against the Blues in Auckland and in the Force’s victory over the Waratahs at nib Stadium.

Following 17 appearances in three seasons for the Western Force, Louwrens announced he would be moving to Japan's Division 2 League to play for the Kintetsu Liners.

After 10 appearances in two seasons for the Liners, Louwrens was signed by the Melbourne Rebels for the 2020 Super Rugby season.