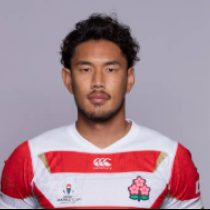 The Japanese international debuted against the Arabian Gulf in 2010, but did not make the squad for either the 2011 or 2015 Rugby World Cups.

Yamanaka joined the Kobelco Steelers in 2013. He was also named in the first-ever Sunwolves squad which will compete in Super Rugby from the 2016 season.

He cemented his name in Japan's squad for the 2019 Rugby World Cup and went into the quarter-finals of the tournament with 17 caps.