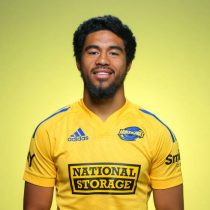 A talented outside Salesi Rayasi had stint in the Canterbury Rugby Academy, where he lost his passion for the game and saw basketball as his real calling. A former New Zealand Sevens representative, the Wellington born player took a break from rugby for a short period as he pursued a career in basketball.

However, Rayasi’s father Filipe, an accomplished professional and former Fijian international rugby player himself and mother convinced the young winger to give rugby one more try. Rayasi’s father played 13 times at fullback for Fiji making his debut against the New Zealand Maori in 1994. That he did, joining the Upper Hutt Rams Premier side late in their Swindale Shield run with immediate impact, scoring a hat-trick. He went on to be named in the NZ 7's side that won the World Cup tournament in 2018.

He was later named in the Wellington Mitre 10 Cup and in 2017 he signed for Auckland. Rayasi was one of Auckland's key squad members in 2018 and helped the side win the competition.

Following the conclusion of the competition, he signed a deal with the Hurricane until at least the end of the 2021 Super Rugby season. Rayasi made his Super Rugby debut off the bench against the Chiefs in Wellington in 2019 and scored five tries in his debut season.

Ahead of the 2020 Super Rugby season, Rayasi has obtained 5 caps and will be looking to add to this total. Rayasi's commitments with the Sevens saw him make a single appearance for the Hurricanes in 2020 as the lanky outside back heads into another season of Mitre 10 Cup action with Auckland where he will look to add to his 22 provincial caps.