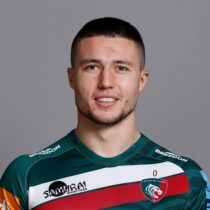 Aspland-Robinson is an English winger that has an incredible youth record representing England at under 16,17,18 and under 20's. Aspland-Robinson has risen through the ranks at Harlequins and is on his way to getting his debut.

He has also been on loan at Worthing Raiders and Rosslyn Park in 2015 and 2016 respectively. He was included in the England U20 squad to compete at the U20 Six Nations tournament.

As a 20-year-old winger Aspland-Robinson joined the Elite Player Development Group (EPDG) in 2013 and played for the Club in the historic 150th Anniversary match against the Maori All Blacks in November.

Away from The Stoop, he enjoyed success with England U20s, securing the Grand Slam with at the 2017 Six Nations and scoring in the win over France U20s. On 22nd March 2017, Aspland-Robinson committed his future to Harlequins before leaving the club in 2018 to join Leicester Tigers.

The versatile outside-back, who joined the club during the summer of 2018, has made 14 appearances for Tigers in two seasons since joining from Harlequins.

In January 2020, Aspland-Robinson agreed a new contract with Leicester Tigers. In July 2020, he signed a new with the Tigers having made 14 appearances since his club debut in January 2019.