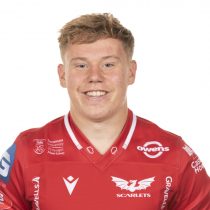 Sam played a prominent part in Leicester Tigers’ Academies Under-18 League victory and an unbeaten season in 2017/18, starting the Final victory over Gloucester at Allianz Park.As a fly-half, Costelow followed his father and grandfather playing for his local club. The Welsh Under-20s international, a two-time U18 Academy League winner with Leicester Tigers, played his minis rugby in Wales before moving to Leicester to join the club’s Academy attending one of the club’s ‘Good to Great’ partner schools, Oakham School.

The fly-half represented Wales U16s and U18s while part of the Tigers Academy, before being promoted to the national U20s squad in 2019. Sam played in the World Under-20s Championships in Argentina – lining up at centre and scrum-half as well as at fly-half – before suffering a fractured jaw in the semi-final fixture against New Zealand.

Part of his rising through the Leicester ranks saw him loaned out to Ampthill and District RFC for their first season in the Greene King IPA Championship. In 2020, he trained with the senior Wales squad while still representing the u20s in the Six Nations u20 Championship.

He entered the u20 Six Nations in 2020 as a 19-year-old and scored a wonderful try against Italy before earning rave reviews for his man-of-the-match display against England slotting a match-winning drop goal before the Scarlets snapped up his services from Premiership club Leicester Tigers ahead of the start of the 2020/21 season.

The move was seen as a huge coop for the Scarlets signing one of Wales' most promising talents.

After 25 appearances, scoring 112 points including five tries, Costelow signed a new deal with the Welsh region.