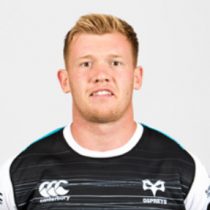 Cross began his rugby career at Brynmawr Youth before joining Ebbw Vale and played for Cardiff Met when he was undertaking a Sport & Exercise Science scholarship.

A former county footballer with Gwent, he has also previously represented his country at rugby league.

His speed, athleticism and ability to offload made him a natural for the 7's circuit and he subsequently became a core Wales sevens player en route to winning his Olympic call-up.

After 12 games for Newport in the 2014/15 season, Cross was included in the 12-man Great Britain squad for the 2016 Summer Olympics in Rio winning silver in Brazil.

Cross made his regional debut for Ospreys in October 2017 in the Champions Cup against Ospreys, scoring a try against the European champions.

In October 2017, he was named in Wales' 36-man squad for the November International matches against Australia, Georgia, South Africa and New Zealand.