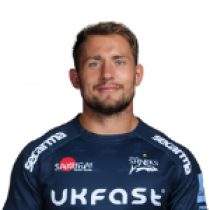 Sam Hill was fast-tracked into the Chiefs ranks from their academy alongside a crop of current England Internationals including Luke Cowan-Dickie, Henry Slade and Jack Nowell. Hill was initially sent out on loan to Cornish Pirates and developed his talents further over two seasons in the Championship, before being selected by England for the 2013 World Rugby U20 Championships which kick-started his Exeter career, he has since established himself as a force to be reckoned with within the Premiership and leaves Exeter with fantastic pedigree.

Born and raised in Exeter, England, Hill is a powerful centre who has represented England at both Under 18 and Under 20 Level. Having attended Queen Elizabeth's Community College, Hill has gone on to line up for the Exeter Chiefs in the English Premiership, making his debut in January of 2012 against London Wasps.

In 2013 he was selected for the English Saxons and has been going form strength to strength at Exeter. In early 2016 he was named by the new England coach, Eddie Jones, in the 6 Nations squad for that coming year.

After over 100 appearances for Exeter, Hill agreed terms on new a deal that will see him with the club for the next two seasons.

Known for his physicality and abrasive style of play, he made over 150 appearances for Exeter since making his Premiership debut for the Chiefs in 2013.

In March, Sale Sharks announced the signing Sam Hill from Exeter Chiefs ahead of the 2020/21 Premiership Season. Sam signed a two-year deal with the club.