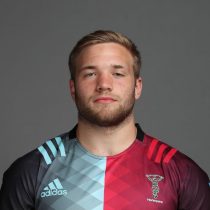 Having joined Harlequins at the age of 15, Hooker Sam Riley has gone on to captain the Club at U18 level and represent England at U16 and U18 levels.

Riley joined the Harlequins Academy ahead of the 2019/20 season and was named on the bench for the Champions Cup clash against Clermont.