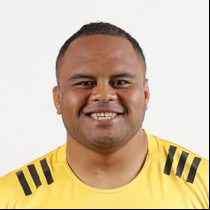 Sydney-born Sam Talakai made the move north to Brisbane following Sydney University’s 2014 Shute Shield season to join Brisbane City for the inaugural National Rugby Championship for a shot at a professional contract.

His performances in the NRC impressed Reds forwards coach Nick Stiles and he was signed to an Elite Development Squad contract. He went on to be a regular starter for the Reds in the 2015 Super Rugby season and earned a spot in the Senior Squad for 2016. He made his Super Rugby debut in Round 1 and went on to feature in all but two of the Reds’ games, starting in five of those appearances.

Sam was the starting tighthead prop for Brisbane City throughout their undefeated title run in the National Rugby Championship.

Talakai has played 161 senior games across two countries by June 2022 when he signed a two-year deal to re-join the Rebels.