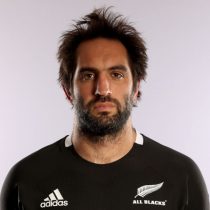 Sam Whitelock epitomises the modern lock: agile, mobile, athletic and a formidable force with ball in hand, and he is also a capable and smart leader. Originally from the Manawatu, he moved to Lincoln University in Canterbury and graduated with a Bachelor of Science.

Although rugby is his first choice, basketball is Sam’s other sporting love – he was selected for a New Zealand Under 18 basketball training camp in 2006, the same year he played lock for New Zealand Schools.

Sam has been an integral part of the Crusaders squad since his debut in 2010 and impressed All Black selectors enough to also make his debut for the national side in 2010, scoring two tries in his first match against Ireland in New Plymouth.


In 2011 he was selected into All Blacks World Cup Squad and started every game bar the first pool match. It was his second world championship win, having previously been a member of the New Zealand Under 20 side that won the 2008 IRB Junior World Championship.


The experienced lock was named as the Crusaders captain ahead of the 2017 Super Rugby, he described by coach Scott Robertson as a natural choice to succeed Kieran Read.


Whitelock immediately repaid Scott Robertson's faith in him as he won back-to-back Super Rugby titles in first two years as captain and his leadership qualities were not overlooked by the All Blacks coaching staff as he captained his country for the first time against Wales in Cardiff in 2017, and also stood in for Kieran Read in the June Test in 2018.


During the 2016 Super Rugby season, he became a Super Rugby centurion and has since gone on to make over 130 appearances in the competition for the Christchurch-based franchise.


In May 2019, Whitelock signed a new deal four-year deal with New Zealand Rugby, the Crusaders and Canterbury until 2023. Under the terms of the deal, Whitelock will take a break from New Zealand rugby after the World Cup to take up a short-term contract with Japanese club Panasonic Wild Knights, meaning he will miss the 2020 Super Rugby season and return to New Zealand at the end of the Japanese Top 14 season in May 2020.


During that time Whitelock will be eligible for the All Blacks becoming the first New Zealand player to sign a deal of its kind.


Whitelock is the most capped All Blacks lock of all time and became a Test centurion in 2018 and enters 2019 with 108 test caps. The veteran lock will be key for the All Blacks in Japan in 2019 having featured in all of the All Blacks Rugby World Cup matches in 2011 & 2015 and has been tipped as the future All Blacks captain.

In November 2020, Whitelock started his 100th All Black test for the fourth Bledisloe Cup test in Brisbane against Australia.