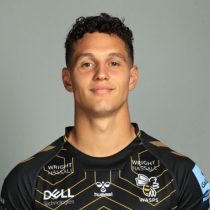 Scrum half Sam Wolstenholme made his first start for Yorkshire Carnegie in the British & Irish Cup against the Dragons Premiership Select at the CCBC Centre For Sporting Excellence in Ystrad Mynach in December 2017.

Wolstenholme made his first start for the club having appeared twice as a replacement in the Cup earlier in the same season. Wolstenholme made his first team debut for Yorkshire Carnegie in the British & Irish Cup pool game against London Scottish at Ilkley in October 2017. He marked the occasion with the clinching try to secure victory for his side. He has been a regular for Hull Ionians on dual registration but originally came from Sheffield RUFC whilst attending Oakham Grammar School for all of his higher education.

The youngster, who is studying Economics at Loughborough University, made 23 appearances for the Leeds-based outfit

Wolstenholme made 23 appearances for Yorkshire Carnegie before cementing his name in Wasps' 48-man senior squad for the 2019/20 campaign.

He was handed his Wasps debut in the Premiership Rugby Cup against Saracens at the start of the 2019/20 campaign, and scored his first try for the Club at Sale Sharks a fortnight later