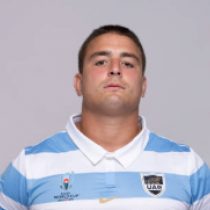 After scoring a try on his international debut, Botta was called up to represent the Pumas in the 2015 Rugby World Cup.

Santiago now plays his club rugby for Jaguares in Super Rugby, he played on 14 occasions during the 2017 season with the Argentinian-club.

He was included in Daniel Hourcade's squad for the November Tests against England, Italy & Ireland.

In March he signed a deal with Harlequins and joined the side after the 2019 Rugby World Cup.