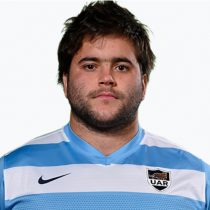 He made 33 appearances for Regaras Bella Vista before he was called up to the Jaguares squad in 2018.

His performances in Super Rugby secured his place in the Argentina squad for the Rugby Championship that year.

Medrano has 21 caps for Argentina (as of December 2020) was part of Los Pumas' first ever triumph over New Zealand. The forward has played 30 Super Rugby matches for the Jaguares since making his debut in 2018 before signing a two year deal with the Western Force.