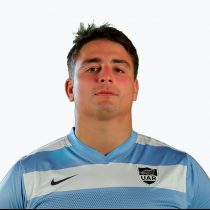 Argentina-born hooker Santiago Socino began his rugby career at Los Matreros and originally headed to the UK to play for Hull Ionians.

After winning the National League 2 North title Socino, younger brother of Falcons Centre Juan Pablo, moved to the North East to take up a full-time development contract with Newcastle Falcons in 2015, where he would move from back row to hooker.

Socino played much of the 2015/16 season on dual registration with National League 1 side Darlington Mowden Park, where he was named coaches’ player of the season.

Making his Falcons first team debut during the 2016-17 season in an Anglo-Welsh Cup tie at Saracens, he scored a try in the Allianz Park clash.

In May 2019, Falcons confirmed that Socino will be returning to his native Argentina to join Super Rugby side, Jaguares.

He was named on the bench to make his debut in the final round of the 2019 regular season against the Sunwolves.

In February 2021, he signed a deal with Gloucester.