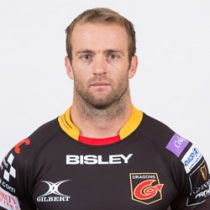 During 2007-2011 Pretorius played in the Currie Cup for Griquas and made his Super Rugby debut for the Cheetahs in 2009 against the Western Force.

In 2010 and 2011 he played in every match. In the 2011 Super Rugby competition he equalled Bjorn Basson from the Bulls as the top tryscorer with nine tries. In 2008 he played for the Emerging Springboks and in 2009 he played for the Royal XV against the touring British and Irish Lions.

Pretorius signed for the Waratahs for two years starting in 2012. After just a single season, however, he returned in 2013 to the Cheetahs to play Super Rugby again for them.

South African scrum-half Pretorius joined Newport Gwent Dragons from Free State Cheetahs at the end of the 2014/15 season on a long-term deal.

After making 70 appearances and scoring 14 tries, the scrum-half revealed that he is leaving the Dragons to return home with the Southern Kings.

Pretorius made 7 appearances for the Kings before the COVID-19 pandemic brought games to a halt.

In July 2020, he announced his immediate retirement from the game following his illustrious 15-year senior career.