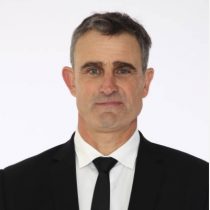 Former All Blacks midfielder turned coach, Scott McLeod joined the All Blacks coaching staff in 2017 after a successful similar role with the Highlanders, during which they won their maiden Super Rugby title in 2015.

McLeod played for Waikato before making his Super Rugby debut for the Chiefs and the All Blacks in the inaugural professional season of 1996. He played 17 matches, including 10 Tests over three seasons, as well as 69 matches for Waikato and 44 for the Chiefs.