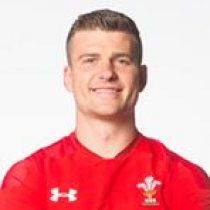 A homegrown talent, who developed through the ranks at Newcastle Emlyn and Whitland, Williams played for Wales U20 in 2009 and 2010 and previously represented Wales at U16 and U18.

His senior debut came against the Barbarians in June 2011 and went to that year’s Rugby World Cup, playing three times. He reached the coveted milestone of 50 senior international caps on Saturday, against New Zealand, at the Principality Stadium.

Williams carried on his good Welsh form to 2012, as against England, as a replacement for Jamie Roberts, he ripped the ball from lock Courtney Lawes before running half the length of the pitch for a fantastic virtuoso try.

Williams started the 2016/2017 season in flying form for Scarlets forming a deadly centre partnership with Hadleigh Parkes, as they combined to great effect in the Champions Cup.

The Scarlets’ centre picked up successive man-of-the-match awards with some outstanding all-around performances.

The hard-running centre featured in Scarlets' Pro 12 championship winning clash against Munster, he has made 124 appearances for the Welsh region, scoring 21 tries.

In November 2017, Williams announced that he will be joining Ospreys on a three-year contract from the 2018/19 season.

In January 2018, Williams was named in the Wales 6 Nations squad and enters the competition with 51 Test caps scoring 12 tries.

Williams helped Scarlets to the final of the Pro14 and the semifinals of the Champions Cup in his final season with the club.