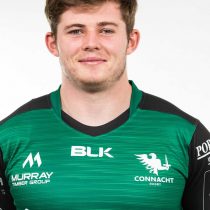 Masterson is a younger brother of Connacht senior player Eoghan.

A former Portlaoise RFC player, Masterson has previously represented the Ireland U18s and can play in the second row and the back row.

In January 2018, he was called into the Ireland U20s that would compete at the U20 Six Nations.

The following year he was named in Connacht's senior squad for the 2019/20 Champions Cup.