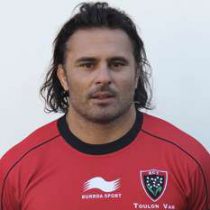 A powerful and well decorated front-rower, Sebastien Bruno won titles with the Sale Sharks, Toulon and France during a stellar career that spanned over a decade.

Bruno started his career with Béziers in the late 90s before going on a loan spell out to Pau. He returned to his parent club and excelled as he cemented his place in the squad making over 50 appearances between 2001 and 2004.

During this time he earned a test debut for France against Wales and helped the side secure a Six Nations Grand Slam in 2002. Bruno joined Sale Sharks from French club Béziers, making his debut against Leicester Tigers in 2004.

He came off the bench for Sale in their Premiership final as he secured his second title with the club after their Challenge Cup glory a year prior in 2005. Following his success with the club in 2006 and earned a place in the 2007 Rugby World Cup squad.

An excellent scrummaging front-rower, Bruno returned to France for the 2009–10 Top 14 season signing for Toulon. His return to France saw him claim more silverware as the club won the Champions Cup in 2013 and again in 2014 before he called time on his professional career.

Following his retirement, Bruno moved into coaching. He immediately started working with Lyon before he was brought into the French national set up in 2018. After the Rugby World Cup in Japan, Bruno joined the Georgian national team.