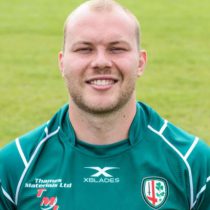 South African-born second-rower Sebastian de Chaves moved to Tigers in the summer of 2013 after a season in France’s Top 14 league with Mont de Marsan.

Qualified to represent South Africa, Portugal and England, de Chaves collected honours at Under-20s level with the Springboks and played in their Junior World Championships in 2010, beating England in the third-place play-off.

After joining newly-promoted Mont de Marsan – alongside former Tigers Seru Rabeni and Ephraim Taukafa – he made 13 league appearances and started all six of their Amlin Challenge up games in 2012/13.

He began playing for the Tigers for the 2013/14 season aged 23. De Chaves spent 3 years with Leicester Tigers before joining London Irish in 2016.

In just his first season he picked up the Players’ Player of the Year Award following a stellar campaign for Irish.

In November 2017, De Chaves extended his contract with London Irish. Scoring four tries in 30 appearances for Irish, the former Springbok Under-20 international is impressed with the long-term ambition of the club.