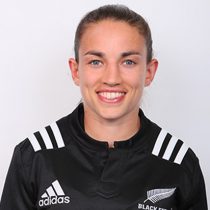 Winiata, who is a Manawatu police constable was part of the Women’s Rugby World Cup Sevens-winning New Zealand side in 2013 and has established herself as a regular selection in that squad.

She debuted for the Manawatu Cyclones in 2001 when she was just 14 and still at Freyberg High School, and has gone on to set a myriad of records for her province. Her 103 tries are a Farah Palmer Cup championship record, while she has gone on to rack up 111 games and 616 points for the Cyclones.
Winiata debuted for the Black Ferns in 2008.

The Manawatu police woman was part of the Women’s Rugby World Cup Sevens-winning New Zealand side in 2013. Four years after her 2008 debut for the Black Ferns, Winiata returned in 2012 to take on England in all three Tests and score a try at Twickenham.

She was a Black Fern again in 2013 and in 2014 featured in all nine Tests in the International Women's Rugby Series and Women's Rugby World Cup. She scored 13 tries in 2014, including five in the Test against Samoa at Eden Park.

Nicknamed “Shorty” as reference to her relatively small frame on the rugby field, Winiata will head to the 2017 Women's World Cup where she will look to add to her 27 Test caps.

Winiata debuted for the Black Ferns in 2008. In 2016 she was in imperious and prolific tryscoring form, winning the NZ Rugby Women’s Player of the Year gong, while in 2017 she crossed for a double in the WRWC final against England, following her hat-trick in the victory over Wales. In 2013 her try against England at Eden Park was voted the fans’ try of the year.