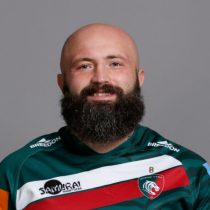 A hard and uncompromising front-rower, Shalva Mamukashvili is another in the endless line of superb Georgian front rowers.

Known for their excellent scrummaging, astute lineouts and high workrate, Mamukashvili is no different to his fellow countryman in the front and has forged out a successful career around Europe and on the test stage.

Mamukashvili first played for Armia during the Georgia Championship and he went on to feature in Georgia's 2012 European Nations Cup squad, making his debut against Spain.

He went on to feature in all four of Georgia's Rugby World Cup pool matches in 2015, playing a part in their victories over Tonga and Namibia. Shalva played his club rugby for l’Armia Tbilissi and Sale Sharks prior to the 2015 RWC, playing at a high level in the Premiership & Champions Cup.

The hooker joined Glasgow Warriors after the 2015 RWC before moving onto France. He joined Toulon from Montpellier in March 2017 as a medical joker before heading to to Carcassone in the French Pro D2 as a medical joker for the start of the 2017-18 campaign.

Mamukashvili moved home to Georgia in 2018 to join Locomotive before linking up with Enisei-STM ahead of the Rugby World Cup in Japan.

He represented his country at the Rugby World Cup taking his test cap tally to 73.

In March 2020, Leicester Tigers confirmed that the Georgia international would join the club ahead of the 2020/21 season.