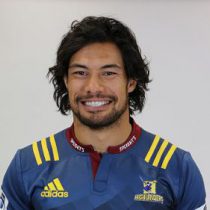 Christie grew up in Canvastown, moving to Nelson to play club rugby and work as an apprentice builder.

It took him four years to earn a provincial contract with Tasman and a further two to establish himself as one of the region's leading loose forwards.

The Crusaders included Christie in their Super Rugby squad for the 2013 season but made just one appearance during his first year.

Christie was lured further south to play for the Highlanders, where he enjoyed a more successful run. He spent a period as co-captain and helped the team win their maiden Super Rugby title in 2015.

He also played for the New Zealand sevens team and for the Maori All Blacks during his career.

Christie captain missed the 2017 Super Rugby and Mitre 10 Cup seasons after suffering from concussion-like symptoms from a head injury he suffered in 2016.

In May 2018, former Highlanders and Tasman captain Christie was forced to retire after failing to recover from his concussion symptoms.

Christie will still be involved rugby with the Tasman Mako after signing on as the side's new Forward's coach.