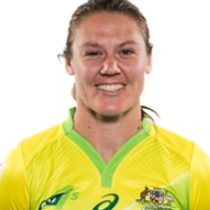 Co-captain and inspiration, Sharni Williams played a crucial role as Australia won rugby sevens' first-ever Gold Medal at the Olympic Games in August 2016. Along with her co-captain Shannon Parry, Sharni lays the platform for Australia's talented backs to strut their stuff around the World Series circuit.

Sharni was named the ACT Rugby Rookie of the Year in 2008 and was shortlisted as a player of the tournament at the 2010 Women's Rugby World Cup.

From Batlow in country New South Wales, the qualified mechanic had played in every leg of the Women's Sevens World Series since its inception in November 2012 until injury ruled her out of the Sao Paulo Sevens in February 2016. However, Williams did return in time to be named in the final round of the 2015-16 season in Clermont that saw her side win the country's first-ever World Series.

Starting off her 2017, Sharni was selected for the Wallaroos during the Women's Rugby World Cup, in Dublin, Ireland. Upon her return from an unsuccessful campaign in Ireland, Sharni donned the boots again, this time for the inaugural Aon University Sevens Series. Where Williams played in the centres for her hometown team, the University of Canberra, who finished in sixth position during the tournament.

Williams led the team alongside co-captain Shannon Parry, in Dubai at the beginning of the 2017/2018 Women's Sevens World Series.

In September 2018 she signed a new two-year deal with Australian Rugby.