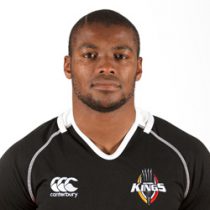 A Queens College old boy Sithole was been impressive since he was selected in the South African Schoolboys side in 2008.

Adept at playing both centres and on the wing Sithole was included in the South African U20 side in 2010 and quickly caught the attention of the Springbok 7s coach Paul Treu as he was called into the squad for the Dubai Sevens that same year.

The following year he represented the Sharks in the Vodacom Cup and Currie Cup and in 2012 he was named in the Sharks Super Rugby squad.

After some consistent performance for the Sharks Sithole was named in the SA 7s squad for the 2013 Sevens World Cup where the side finished in 3rd place.

In 2014 he was named into the Springboks camp ahead of the June internationals.

In September 2016 he suffered an injury that ruled him out for the remainder of the 2016 Currie Cup.

Ahead of the 2017 Super Rugby season, Sithole has scored 4 tries in his 33 Super Rugby appearances.