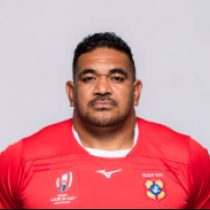 Fisiihoi currently plays as a prop for the Bay of Plenty in the ITM Cup, debuting for them in 2014.

His domestic performances saw him named in the Chiefs wider training group ahead of the 2016 Super Rugby season.

He made his Super Rugby debut in 2016 against the Force, his performance earned him a further 9 Super Rugby caps that season.

Fisiihoi made 13 appearances during the 2017 season before signing a deal with French Giants Stade Francais.

2019 saw him join Pau on an undisclosed deal.