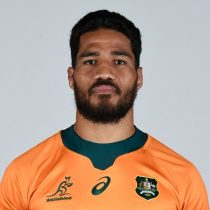 Born and raised in Tonga, Sitaleki grew up with aspirations of playing goalkeeper for the Tongan national soccer team. At age 7 he lost his father to a diving accident while his father was working on a fishing boat. The loss of the major breadwinner plunged the family into poverty.

At 11 life struck another cruel blow as he and his brother, Sione, went swimming and Sitaleki was attacked by a shark. After swimming back to shore and being bitten on the leg and on the stomach Sione managed to carry Sitaleki out and get him medical assistance with little brother Lopeti following.

His village did not play rugby and playing football his talent got noticed and he joined a school in Australia to play football at the age of 15.

Incredibly, the imposing second-rower had never even seen a game of rugby until the age of 17, when he watched the 2003 Rugby World Cup final at a neighbour’s house.

He soon made an impression in the game and signed a U20 contract with the Western Force. He soon realised he could make a good living playing a game he loved with his main focus being on supporting his family at home. He and his brothers, Sione and Lopeti, all do so as professional rugby players.

The Tongan-born second-rower began his professional career in 2008 with the Force, making his Super Rugby debut against the Sharks in Durban. Timani went on to make eight appearances for the club before moving on to the ACT Brumbies in 2009, then to the NSW Waratahs in 2011. In 2011 Timani became Wallaby No. 851 after making his debut against Samoa in Sydney on the 17th of July. The 203cm lock has 18 Test caps to his name.

After earning over 50 Super Rugby caps, Timani made the move to France in 2013, signing for Montpellier. He went on to make 45 appearances between 2013-2016 before switching to fellow Top 14 side Clermont.

Timani established himself as one of the league’s premier second-rower, playing over 100 times for Clermont. He was granted an early release from his Clermont contract in order to return to Australia, where he was signed by the Western Force as injury cover.