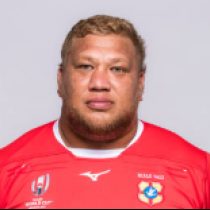 Halanukonuka is a genuine Tongan prop who is tough as nails, a strong ball carrier, and a bone-crunching tackler.

He joined the Highlanders in 2015 and made his Super Rugby debut in 2016 against the Hurricanes.

His debut for Tonga came in 2014, appearing off the bench in a 23-9 win over Georgia. He has since gone on to win 11 caps for his country and featured in their famous 19-17 victory over Italy in November 2016.

The prop also has experience of European rugby, having made 10 appearances for French side Narbonne as a medical joker in the 2014/15 season.

In July 2017, he signed for the Glasgow Warriors on a two-year contract in October, following the conclusion of his Mitre 10 Cup commitments with the Tasman Makos.

In 2019 he signed a new two-year deal with Glasgow Warriors following 30 appearances for the side as of December 2019.