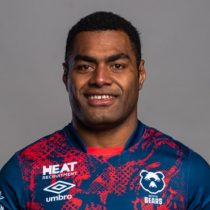 Siva Naulago’s journey to the Premiership is a unique one, but the Fijian cross-code star, who took the Super League by storm with 17 tries in 21 appearances for Hull FC, is ready to unleash carnage in English rugby’s top-flight.

A Private in the British Army, Naulago was still living in army barracks during his stint up north, where he wasted little time in announcing himself on the big stage, with two tries on debut against Wigan Warriors.

His whirlwind start at Hull continued with braces in wins over Huddersfield Giants and Leeds Rhinos, and a man of the match display on his Challenge Cup debut against Castleford Tigers.

Naulago has also enjoyed guest stints in rugby union, representing both Bath and Saracens in the Premiership Sevens, and the British Army in the Babcock Trophy at Twickenham.

But it was his Sevens prowess that caught the attention of the then Hull FC Head Coach, Lee Radford, who wasted little time in offering the winger an initial trial and then a one-year deal.

From there, Naulago has flourished, with Bristol Director of Rugby, Pat Lam pouncing to gain the signature of one of Super League’s hottest properties.

Siva Naulago’s passage to Ashton Gate is remarkable, having moved to the British Isles aged just 18 to join the armed forces.

He soon became a mortarman in the first battalion of the Yorkshire Regiment, before being stationed in Cyprus for two years and making a brief trip to Afghanistan.

Naulago put his military responsibilities on hold to pursue his rugby career and has been granted an extended leave by the Army, allowing him to take up his contract at Bristol Bears.

Naulago signed a two-year deal at Ashton Gate until 2022/23.