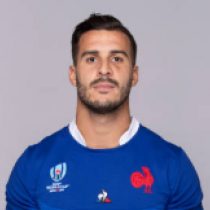 Algerian-born, Sofiane Guitoune started his career at Agen before moving to Albi.

His journey continued to Perpignan in 2012 and it was there where he started to produce a number of eye catching performances which lead to him yet another move to Bordeaux in 2014.

His powerful style of play was noted by the French national set up and he made his test debut for the national side against Tonga in 2013.

Featuring at fullback, wing and centre Guitoune was selected in the final 31-man squad for the Rugby World Cup, the first of his career.

He left Bordeaux following the conclusion of the 2015/16 season as he signed for Toulouse.

The fleet-footed back, who has 5 test caps to his name, has since become an integral part of the Toulouse set up featuring mostly in the centre.

He helped Toulouse to a Champions Cup semi-final and win their 20th TOP14 title.

He made two appearances at the Rugby World Cup as France reached the quarter-finals.