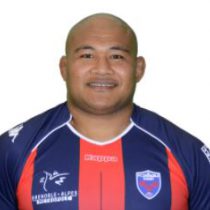 A Super Rugby winner with the Chiefs, Taumalolo is not only a threat at scrum time but is a genuine try scoring threat.

6 years at the Magpies in the NPC and a number of Super Rugby seasons had culminated in him making his move to France to represent Grenoble.

In 2018, his career ended at Grenoble and he made his return to Hawke's Bay.