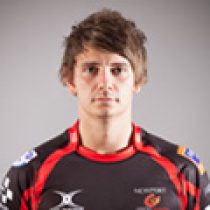 The outside half joined the region in the summer of 2010 having started his rugby career playing for Bargoed and was picked through the regional player identification system. His first game for the Dragons was against Gloucester as a substitute in the LV= Cup in November 2010. He was then switched to fullback for his first start against Cardiff Blues, having impressed Dragons Director of Rugby Robert Beale whilst playing there for Keys. He scored his first try for the region in that very match. The 2011/2012 season saw Steffan become more of a regular in the Dragons matchday squad, making his first start in his favoured fly half role in the victory away at London Wasps in the LV= Cup, kicking the winning penalty in the last minute to secure a 30-29 victory.

Jones left Dragons ahead of the 2014/15 and joined Bedford Blues. He has also gone on to be a regular in Wales 7s squad.