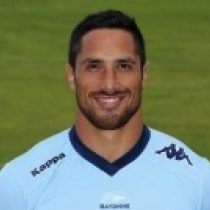 After making his Nunior All Blacks debut in 2007, Brett joined the Crusaders in 2007, where he became the season's top points scorer.