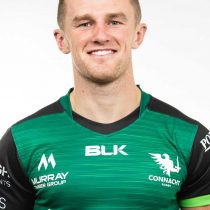 In 2015, Fitzgerald started in four of Ireland’s U20 6 Nations matches and made a further four starts in the World Rugby U20 Championship in Italy.

He went on to make his PRO12 debut in September 2015 against Ospreys at the Liberty Stadium, scoring his first senior try.

Later in the season he featured in the Ireland Men's 7s squad and made five Munster A appearances in the B&I Cup.

At the start of the 2017-18 season he was awarded a senior contract with the province.

He went into the 2018/19 season with 7 appearances for Munster and 10 points scored.

In December 2018, he signed a short-term deal with Connacht and made his debut in the interprovincial win over Ulster at the end of 2018 and featured seven times for the province, also scoring a try against Glasgow before signing a new deal ahead of 2019/20 season.

After three operations on a serious knee injury in an attempt to save his career, Stephen Fitzgerald announced his retirement at the age of 25-year-old in May 2021.