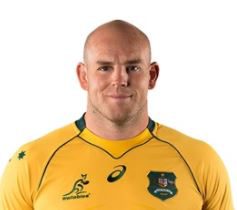 Knocking over his 100th Super Rugby cap at Canberra Stadium against the Blues in 2012, Stephen Moore cemented himself as Australia’s premier hooker.

The disappointment of narrowly missing the finals was slightly alleviated when Moore’s efforts throughout 2012 were recognised by his peers, who named him the Brett Robinson Player’s Player. It was a worthy addition to his trophy cabinet, which also features the Brumbies Best Forward Award for the 2011 season.

A natural leader, Moore was one of three players selected as vice-captains of the Brumbies in 2012, along with fellow Wallabies Dan Palmer and Pat McCabe. In 2015, he took the the reigns as the Brumbies captain for Super Rugby.

He was also chosen to lead the Wallabies on a crucial 2015 campaign after he was named as captain by coach Michael Cheika ahead of The Rugby Championship.

The big hooker lead his country in the 2015 Rugby World Cup, with 96 caps under his belt.

In July 2017, Moore announced that he would retire from international rugby at the end of the year and will play in his final Super Rugby season in 2018.

In November 2017, Moore announced his retirement from all forms of rugby after Australia played Scotland, he finishes his career the second-most capped Australian Test player of all time with 129 Test caps (8 Tries)

He played the second-most number of Super Rugby games (177) of any player in the history of the competition (23 Tries).